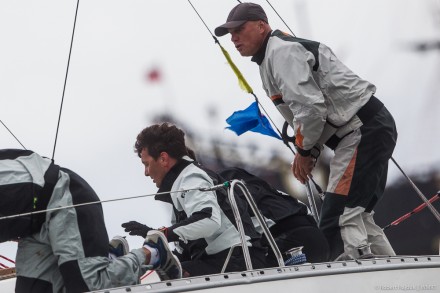 Sopot, Poland (30th July 2015) Veteran Polish match racer and America’s Cup helmsman Karol Jablonski skilfully played the gusty conditions today to lead the twelve strong field of teams at the end of Day 2 of Qualifying at the 2015 Energa Sopot Match Race. The Sopot regatta is Stage 10 of the 2015 World Match Racing Tour and one of six World Championship level events on the ISAF sanctioned World Tour. Jablonski leads the field with an 9-2 [win-loss] scoreline with three flights remaining in Qualifying. The two Swedish skippers Björn Hansen (SWE) Nautiska Racing and Johnie Berntsson (SWE) Berntsson Sailing Team lie in joint second position with 7 wins each. Danish skipper Nicolai Sehested and his Trefor Match Racing team, competing in his first Tour event this year, sits just one point behind with 6 wins. Jablonski, 52, is the oldest skipper competing in the event (much to the delight of 48yr old Bjorn Hansen), but as a former ISAF Match Racing World Champion and America’s Cup skipper (not to mention a nine-time World Ice Yachting Champion), Jablonski revelled in the blustery conditions today to remain one of the favourites for the event. WMRT Blustery conditions today tested all 12 teams on Day 2 of Qualifying at the 2015 Energa Sopot Match Race © Robert Hajduk / WMRT “We had a tough day at the office but we are very happy with the result” commented Jablonski. “My team has done an incredible job here handling the boat in these tough conditions, and bringing us back whenever we have been behind. To sail so well in our home waters is also a great promotion for sailing in Poland, we need events like the Energa Sopot Match Race in Poland.” As all of the teams struggled to keep their boats upright in gusts over 30knots, the spectators watching the racing from the end of the Molo Pier were treated to a fine display of toe to toe action by the teams. WMRT There she blows… gust hit over 30 knots during qualifying day 2 at the Energa Sopot Match Race © Robert Hajduk / WMRT But it was 25yr old Australian David Gilmour of Team Gilmour who was dealt the unfortunate gust of the day resulting in his mast snapping clean in two during a close downwind battle against defending ISAF World Champion Ian Williams (GBR), GAC Pindar. As the two teams headed to the finish line on the last leg of their race, a freak gust threw Williams’ boat into a Chinese gybe forcing his spinnaker to apparently clip the backstay of Gilmour’s boat. As Gilmour fought to keep his boat steady, the mast snapped above the spreaders and fell forward to the deck. Williams was able to right his boat and take the win as Gilmour limped his boat back to the marina. WMRT Mast down! Gilmour getting the clip from Williams © Robert Hajduk / WMRT „It was not a good day for us today, but it will definitely be memorable!” said David Gilmour. „We still don’t really know what happened because it all happened very quickly. There was probably a twenty knot difference from behind Williams to when the puff hit the boat and there were some pretty high loads going through the boat” Unfortunately for Gilmour, he ended the day with a 3-8 score-line ending his competition along with brother Sam (2-9) and New Zealander Reuben Corbett (1-7). Racing resumes at 1000 tomorrow with slightly lighter 12-18 knot winds forecast from the West. 2015/16 World Match Racing Tour World Championship Event – Energa Sopot Match Race QUALIFYING RESULTS after Flight 19 1. Karol Jablonski (POL) Jablonski Sailing Team 9-2 2. Björn Hansen (SWE) Nautiska Racing 7-1 3. Johnie Berntsson (SWE) Berntsson Sailing Team 7-4 4. Nicolai Sehested (DEN) TREFOR Match Racing 6-5 5. Ian Williams (GBR) GAC Pindar 5-3 6. Przemyslaw ‘Tara’ Tarnacki (POL) Energa Yacht Racing 5-6 7. Eric Monnin (SUI) Team SailBox 4-4 8. Joachim Aschenbrenner (DEN) Aschenbrenner Racing 4-4 9. Matt Jerwood (AUS) Redline Racing 4-4 (3.5) 10. David Gilmour (AUS) Team Gilmour 3-8 11. Sam Gilmour (AUS) Neptune Racing 2-9 12. Reuben Corbett (NZL) Corbett Racing 1-7 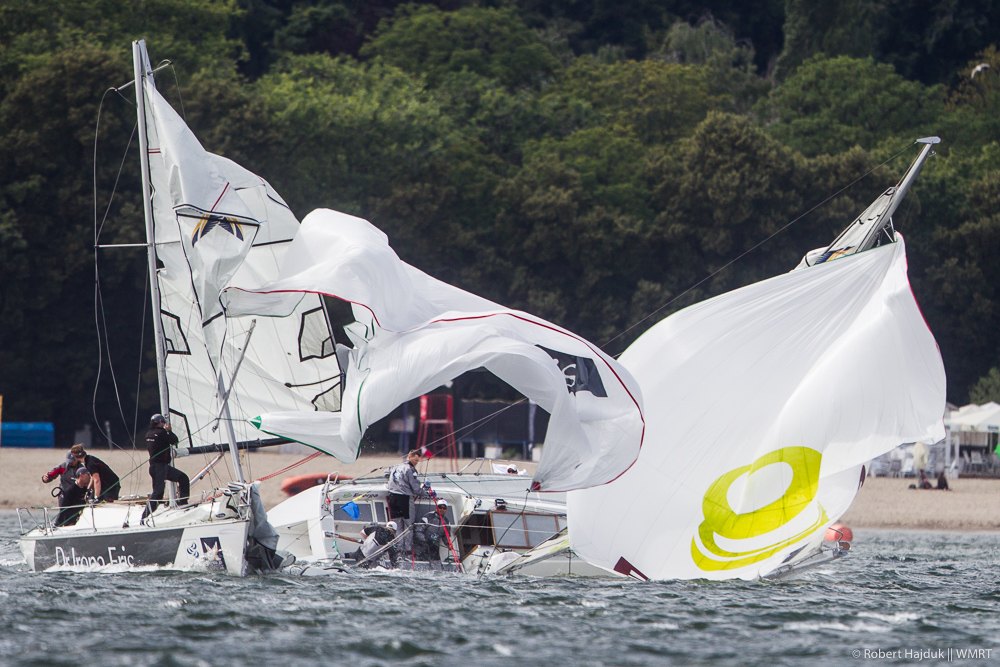 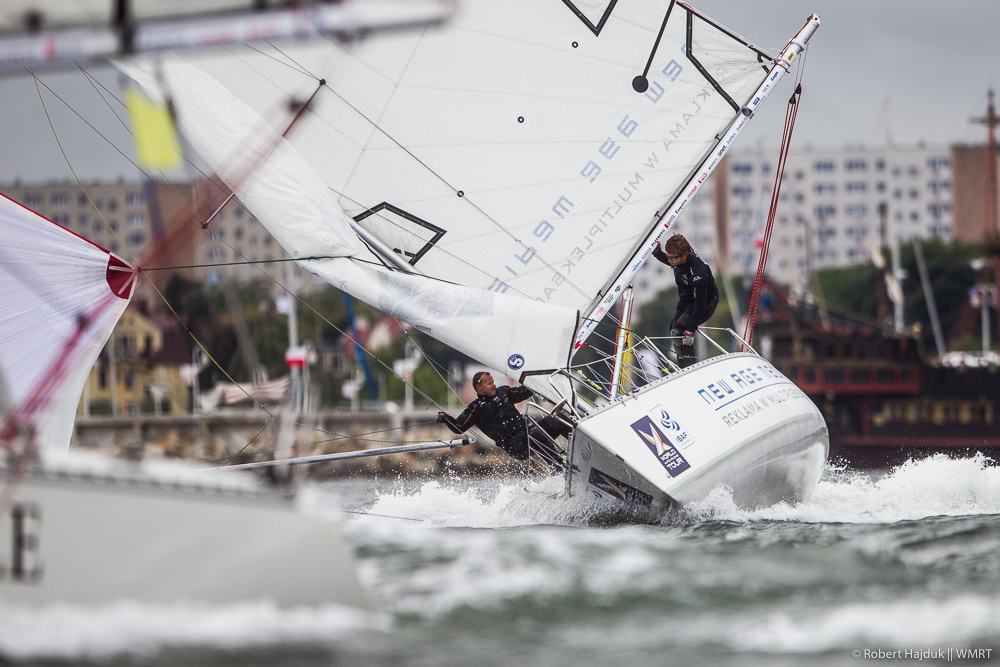